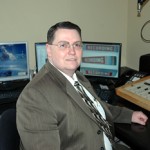 Jody McManus was born and raised in Colorado. Upon graduation from South High School in 1984, Jody pursued a career in the culinary arts, assuming the role of apprentice chef for Writers Manor, a four-star hotel that was the owner of Disney’s Celebrity Sports Center. He was later promoted to the position of sous chef at the sports center.

His formal training would serve him well in the plans God would have for him. In November of 1988, Jody moved to Oregon to attend Western Culinary School, where he met his wife Tracey. After graduation Jody was hired by Red Robin, Inc., as kitchen manager; shortly thereafter, he was promoted to new store training kitchen manager. When not assisting new Red Robin franchises, Jody was enlisted to help struggling stores improve their quality control.

After nearly two decades of success in restaurant management, God intervened and changed his life’s course. In 1998 the Lord guided Jody into Christian Radio. Assistant Pastor Jay Towne enlisted Jody as a volunteer at KOLU 90.1 in Pasco Washington, a ministry of Riverview Baptist Church. In addition to a variety of on-mic and recording duties, Jody was able to bring his talent for detail to the station’s programming department, both as a live fill-in host for the popular Kid’s Morning Program, and as an input technician for the station’s automation system. Quality control was vital to this job—much as it was during his culinary career.

Inspired by the teaching and preaching he was inputting into the station’s computer, Jody surrendered to full-time Christian service. Shortly thereafter, the McManus’ moved to Crown Point, Indiana, to attend Hyles-Anderson College. During his Bible training, Jody began working for Dr. Bob Marshall as the programmer for the church’s Internet radio broadcast. Following graduation Brother Jody was hired in December 2007 as program director for WRTW Radio. Currently, Jody is the stations manager, and his efforts can be heard in the broadcast content of Powerful, Positive Radio—90.5 The Key.